The sky’s the limit

Ashwanth Krishna Vijay Ananda Kumar isn’t very impressed by boundaries. He left his homeland India for Germany and came to a completely different world. Exploring unchartered territory is in his nature and has determined his career: as the assistant to management at GEALAN, he delves deep into numbers and analyses, researches new markets and product potential, and promotes innovative sales tools and agile work methods. His goal is to push boundaries and play a role in making GEALAN a little bit bigger, better and more efficient each and every day.

Coimbatore is located in the southern Indian state of Tamil Nadu. The metropolis with 1.1 million inhabitants is known for its temples and monumental statue of Adiyogi Shiva, as well as for being an important location for textiles, and it is also Ashwanth Krishna Vijay Ananda Kumar’s (27) home city. This is where he is born and lives with his parents and where he attends a private school until year 12, develops his passion for maths, receives good final marks, and begins his university education. However, the master’s programme he opts to pursue after obtaining his bachelor’s degree will change his life. At the PSG Institute of Advanced Studies in Coimbatore, he takes German-Indian Management Studies – a study programme that exists in cooperation with Hof University of Applied Sciences and is ‘truly something very unique, as it does not exist at any other university with a Master of Business Administration degree’. He takes a crash course in German and obtains an A1 understanding of German within three months, and then the biggest change in his life occurs in 2017 – he moves to Germany, to the Hof University of Applied Sciences.

His relocation is more than just a change of place. ‘The weather, the culture, the people, the food and the entire way of life – everything is completely different here than where I come from.’ It’s a change that might scare less confident individuals. Instead Ashwanth Krishna is thrilled: ‘My first impression was wow!’ The word which he likes using in this connection is: ‘Opportunity!’

The Hof University of Applied Sciences maintains good contact with its Indian students – to fellow students from Germany and from other countries. Help is always available when it comes to housing or other formalities, intercultural events such as communal dinners and excursions encourage socialisation, and the welcome package even provides information about Germany and its job market. This is how Ashwanth Krishna settles in in Hof. It takes him 1.5 years to complete his master’s degree in Germany and major in Marketing/Sales and Project Management. To complete his master’s thesis, he looks for a nearby company. ‘Hof is small and quaint, and I like the city – and GEALAN immediately caught my eye as one of the best employers, the company was my first choice.’ The focus of his master’s thesis which he is already writing for GEALAN is on digital marketing. After graduating with his degree in Master of Business Administration, he starts working at GEALAN as a Sales Trainee in 2018. He gets to know all departments, participates in sales, and sees how GEALAN develops and manages international customer relations, as well as how it builds windows and doors. ‘This was a very useful time for me because I got to know my colleagues, the products and the entire business process.

After his training period is over, Ashwanth Krishna becomes an executive assistant in 2020. ‘My job is extremely interesting: I generate product and market analyses for Europe, as well as Group-level analyses on competition and sales to support our sales excellence process, and I prepare meetings, strategy discussions and customer conversations. I’ve got to know the colleagues and processes at all our international sites during my visits there.’ Overcoming barriers and seizing the chance to work at GEALAN is proving to be an outstanding career decision for Ashwanth Krishna.

His colleagues at GEALAN call Ashwanth Krishna the ‘Master of Numbers’. During his early school years, he already has a penchant and talent for maths and loves getting lost in numbers. In order to identify correlations and opportunities for improvement from turnover figures and sales volumes, Ashwanth analyses key performance indicators, for example, for the innovations GEALAN-acrylcolor®, GEALAN-LINEAR®, GEALAN-SMOOVIO® and STV®. The purpose is to anticipate market developments and figure out how a product can be sold even better. Since June 2021, following the introduction of the new CRM system Sales Cloud at GEALAN in Germany, Ashwanth Krishna has played a key role in ensuring that the system is also operating properly throughout the European Group companies. ‘It’s a very big project for me.’ Being fluent in English helps him collaborate with his colleagues from abroad. ‘Sales Cloud is a user-friendly system which has a similar interface to those used in social media. It amalgamates all information about our customers, contacts and protocols. Once we’re using it everywhere, we’re going to save a lot of time and have a very efficient cloud system.’ It will eliminate all barriers between the parent company and its subsidiaries.

Ashwanth Krishna is an early riser and loves discipline and order. ‘I am in the office every day before 7 a.m.; I feel refreshed and can concentrate on doing analyses and reports. In the afternoon, I talk to GEALAN locations abroad about Sales Cloud and other projects, and I map out my next day in detail.’ When Ashwanth Krishna comes across a new German word in his day-to-day work, he jots it down and looks it up at home in the evening, thinking precisely about what it means and how he can form proper sentences with it. After completing his language courses in Coimbatore and at the Hof University of Applied Science, he now continues to learn independently online. Gone are days when he feared misunderstanding something or being misunderstood. In addition to speaking his Indian languages Tamil, Telugu and Malayalam, as well as English and some French, Ashwanth Krishna is becoming increasingly comfortable speaking German. Yet another barrier Ashwanth Krishna is leaving behind.

In the evening, he goes for a five-kilometre run, works out, watches Indian and European films with his wife and enjoys cooking – Southern Indian cuisine, of course. He has his parents send him the very fiery original spices required for this or he buys them online. However, he enjoys the wide variety of bread available in Germany, but especially likes pretzels. Ashwanth Krishna loves to travel and is chiefly interested in European countries – his curiosity is literally boundless. He spends his annual leave back home. ‘Just one or two weeks with the family is simply not enough’. His parents are just as proud of his career as he is himself: ‘Everything that I am and have, I have built myself. I enjoy the freedom of being able to forge ahead on this path and pour all my energy into it.’ 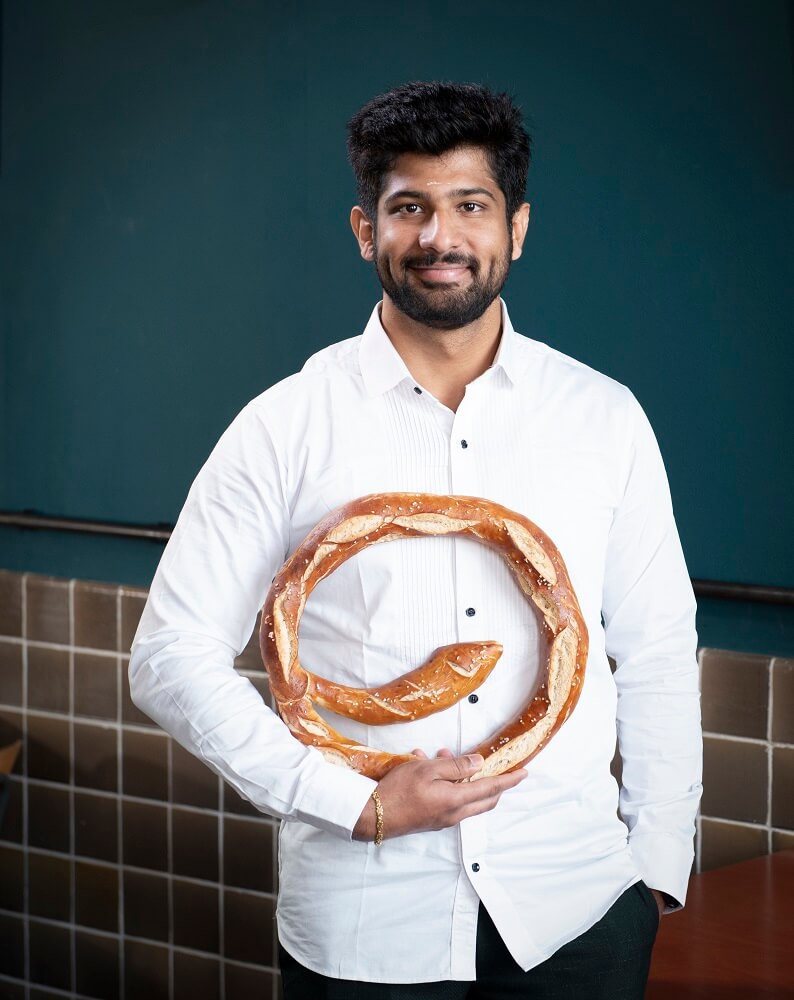 Ashwanth Krishna has been a Scrum Master since July 2022 when he attended a two-day workshop and successfully passed the test. Scrum is an agile model taken from the world of software development and used internationally today in project management. It is intended as the antithesis to the conventional chain of command and is based on interdisciplinary teams finding their own ways to achieve a defined goal. The roles in the Scrum team are clearly defined: the Product Owner is responsible for the product features and their prioritisation. Developers are meant to provide the desired product features in the desired order. And the Scrum Master is put in charge of making sure all Scrum rules are observed. He coaches, moderates and eliminates obstacles. GEALAN will use Scrum as one of its agile methods in many areas in the future. Ashwanth Krishna sees great opportunities here: ‘We will get even better at working as a team because we operate across a variety of different fields in a self-organised manner. We will be more efficient and be able to identify and solve problems faster.’ Scrum is not strictly restricted in terms of content. The model can be applied to every type of product development and project management situation. In other words, it is a universal tool that is breaking down barriers between departments and between managers and those merely taking orders. The role of Scrum Master is a good fit for Ashwanth Krishna. Ashwanth Krishna’s perfect day at work is tied to performance. ‘If I am given two days to complete a job, then I aspire to get it done as quickly as possible, even within just one day. I am happy when my work works and is recognised. And it highly motivates me to improve, to be faster, and above all, to learn something every day.’ His true motivation lies in expanding the limits of his own knowledge and skills a little every day.

National borders, language barriers, culinary limitations, barriers in the chain of command, as well as the limits of one’s own knowledge: Ashwanth Krishna explores them all and then deliberately moves past them all. There’s no other first name that could suit him better: ‘Ashwanth’ – he laughs – ‘means no boundaries.