A new 3D printer is being used at GEALAN's Oberkotzau site. It works with synthetic resins and laser technology - and thus more accurately than its predecessor.

The design department has upgraded its technology: Since July 2021, fine plastic components can now be printed with new equipment. However, the technology of the new 3D printer is completely different from that of the previously used apparatus, as Philipp Benker, design engineer at GEALAN, explains: "Before, we always produced accessory parts using the so-called FDM 3D printing process. That is, here an ABS plastic wire with a diameter of 2 mm is spooled onto a cassette. In the printer, the wire is then heated and melted, building up the 3D-printed component layer by layer."

The new 3D printer, on the other hand, uses a process known as stereolithography (SLA). This is an additive manufacturing process to transform liquid resin into cured plastic. Lasers are then used to solidify the resin. The resin is contained in two cartridges that are plugged into the printer. It is automatically fed into the resin tank and - as the parts are printed - is continually replenished. "More than three dozen materials can be used here, each for different applications. Depending on what we want to print, the resin and the resin tank are changed," Philipp Benker describes, giving examples: "With our FDM printer, only solid components can be produced - with the new SLA process, flexible, high-strength or temperature-tolerant prototypes can be printed, among other things."

Production is fully automated from CAD data created on the computer. At GEALAN, this is cloud-based: "We can see on the computer in real time how much material is being used, which shift the printer is currently on, and when the print job will end.

Smaller parts take around one or two hours to print - if the build platform is loaded with large-format parts, the printing time can quickly exceed 50 hours until the finished parts are printed. The advantage of the new SLA printer over the FDM version is the larger print volume: where the previous GEALAN printer could print in a maximum format of 20x20x15 cm, the SLA printer allows for the significantly larger build space of 33.5x20x30 cm. Philipp Benker adds another advantage of the new addition: "Compared to the FDM process, the layer thicknesses can be set much finer. Here, the layer thickness adjustment ranges from 0.025 to 0.3 millimeters, enabling a smoother surface finish and finer details." 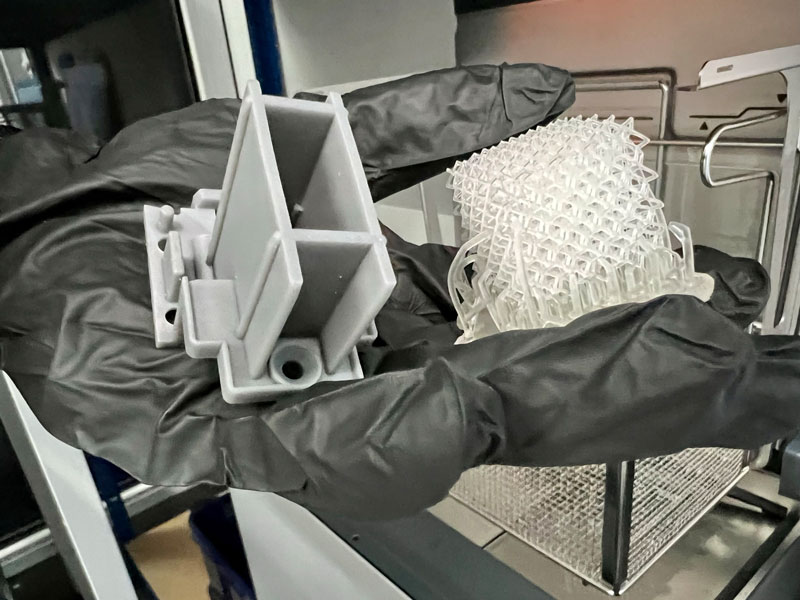 What comes out of the 3D printer at GEALAN? "Actually, our entire range of accessory parts: These are, for example, sleeper holders, mullion connectors and face caps - everything we design as injection-molded parts, we can print here. But accessories such as drilling templates or test gauges can also be implemented without any problems." The printed components are then used for initial tests, as Philipp Benker explains: "The point is to have a part in hand for a change, to install it on a test basis, to see whether it collides somewhere, for example, and whether the function corresponds to the idea."

The "old" FDM printer is also still in use at GEALAN; it has been doing its valuable job since 2016. In the past, before GEALAN had 3D printing in-house, additively manufactured components were commissioned as a service. "Back then, the parts were still manufactured using the so-called SLS process, in which powdered plastic material was melted using a laser. Not only was that significantly more expensive, we also had additional waiting times before the ordered objects were delivered." Fortunately, this is no longer an issue for the design department in these times, as Philipp Benker confirms: "Nowadays, we can simply print the parts we need overnight."