As Kevin Schmelzer began at GEALAN Fenster-Systeme as a tool mechanic trainee in 2006, things were quite different: 15 years ago, production had to be interrupted to run in new tools – that is to optimise them down to the last detail and finish adjusting them for production.

Kevin Schmelzer is now Group Manager in toolmaking and one of those responsible for the digitalisation process at the internal toolmaking area of the plastics system provider headquartered in the Upper Franconian municipality of Oberkotzau. In 2018, he even assumed management of the project. Made up of ten to 15 members, the core team has been working to take toolmaking to a new level ever since. “The infrastructure is complete. We want to apply it in initial projects this year, 2021.”

In this case, “projects” means: Special extrusion tools are produced in the toolmaking area. Simply put, these generally consist of a nozzle, calibration and a sealing tool, referred to as “PCE tools”. In turn, the finished extrusion tools are required to produce – in GEALAN ’s case – plastic profiles for windows and doors. The profiles are then processed and installed by window manufacturers.

To be able to produce this type of extrusion tool, which can often cost more than 100,000 euros, a technical drawing is first created and transformed into a 3D model on the computer using special software. These data ultimately result in a prototype of the tool. 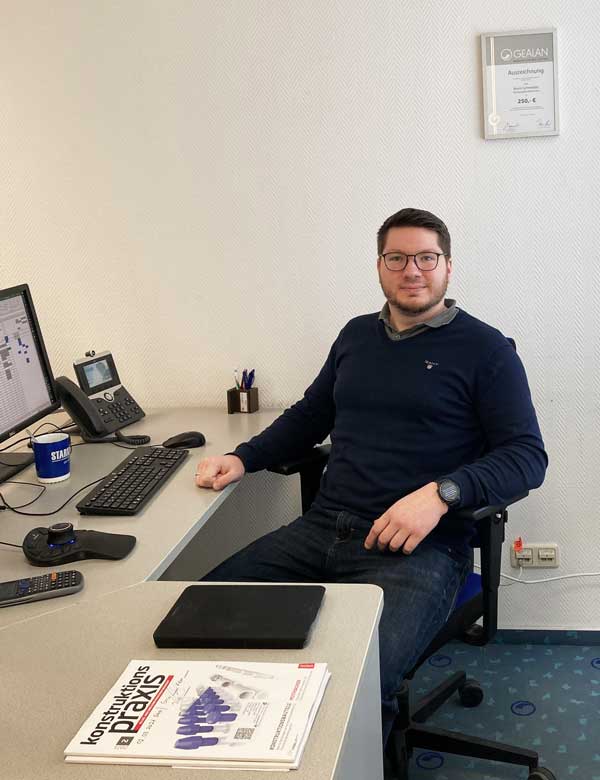 Digital twins do away with the need for new constructions

What’s new? Kevin Schmelzer explains: “Previously, we had a lot of software interfaces, which we have now been able to remove. This saves us a great deal of time and effort cloning tools.” The digital twins of the new tools now make it unnecessary to redesign and run in each tool from scratch. Unlike before, production data are now fed back into the design. Adjustments to the new tools are uncomplicated: “Manual changes during the run-in process are done using a GOM measurement and fed back into the 3D model.” The finished tool and its digital data then serve as the starting point for the next tool. Once this digitalised process has been established, it will help save a significant amount of production and run-in time for new tools: “We estimate that this will save us around a third of our costs. With tools that are produced for somewhere in the six-figure range, these are enormous savings,” states Kevin Schmelzer, confident that digitalisation will also be clearly reflected in the numbers in the GEALAN toolmaking area. The new processes are also paperless: Previously, mountains of plans needed to be printed out and taken to the various production stations, but now all the necessary data arrives in real time on tablets. This not only reduces the distances walked, but also saves money, particularly in view of the high cost of printing.

Norbert Gruner, Head of Toolmaking at GEALAN, summarizes the major advantages of the new digital infrastructure: “The entire toolmaking process takes place within just a small space at GELEAN. As an internal toolmaking area, we also have the advantage of being able to concentrate entirely on GEALAN technology. As we’re always building not only new geometries but lots of new tools, this innovative technology and approach will give us a major edge in future. In procuring and configuring the new systems, we focused specifically on significantly reducing design and run-in efforts for new tools, which we will now achieve with the digital twins of the tools.”

In addition to a glimpse into the future of the window market, the International Future Forum 2022 also showcased product innovations, new developments and digital solutions for the industry. Guests from all over Europe were able to discover GEALAN’s broad portfolio of products and services on site at the headquarters in Oberkotzau as well as via the online live stream.

Two event days with a total of twelve specialist talks in ten languages, staged for GEALAN partners from all over Europe, who either attended in person or tuned in virtually: The International Future Forum 2022, held in a hybrid format for the first time ever, highlighted new products, trends and digital solutions for the window industry. More than 700 participants joined in live either via online stream or in the event tents at the GEALAN headquarters in Oberkotzau.

Start of construction for the next GEALAN milestone: The groundbreaking ceremony for a fully automated high-bay warehouse took place at the production and logistics site in Tanna. The cost of the construction project has been estimated at around 14 million euros, making it one of the largest single investments in the history of the PVC profile manufacturer. The company is planning to put the new high-bay warehouse into operation in the first half of 2024.